This is the second part of the article and it gives more detail about the costs of making marketing noise.

This is the second part of the article and it gives more detail about the costs of making marketing noise.

It should be noted that much of this information has been developed as background for UK based, Aerial Work Balloon Businesses – however, if you are thinking of setting-up elsewhere, much is still highly relevant but please speak with us for specific help and information enquiries@cameronballoons.co.uk  +44(0)117 963 7216

We are here to help with all things ballooning.
Together, we expertly build the incredible!

In August 2016 – Eventbrite reported that there are over 7000 outdoor events in the UK each year – so plenty to choose from… and that is just in the UK.

Figures for – BIBF exposure and reach

11. Philippine International Hot Air Balloon Fiesta (North of Manilla, Philippines) February
Estimated crowd size: more than 60,000 with about 100 balloons attending with other events such as skydiving, flag jumps, microlight, and rocketry demonstrations as staples of this festival

Facebook adverts.
Appear most usually on the right of your home feed. Used for more likes, to send users to a tab (e.g. for a special offer), or to encourage them to land on your website usually costing about 20p to 70p per like. You can set a maximum daily budget.

Twitter adverts.
Twitter shows these as sponsored updates in your feed either by targeting keywords in tweets or hash tags or target specific Twitter users and their followers, as well as their interests. There are clicks (on links and hashtags), retweets, replies, and follows. When you set a bid for your ad, you are bidding on all of these engagements – known as “effective Cost-Per-Engagement” (eCPE). You can set a maximum daily budget. Expect to pay about 30p to 70p per engagement.

Television
According to televisioncampaign.co.uk the costs for a single 30 second advert are as follows:
Channel 4
• Daytime average: £3,575
• Peak average: £6,400

www.itvmedia.co.uk
The cost of “TV advertising (can be) £2,000 up to more than £1 million”
2016 ITV Spots are a classed as a 30second advert which does not include the cost of making an advert for one transmission – split by UK region. 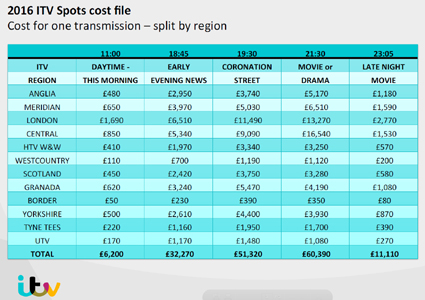 Factors that affect billboard costs include location, design, setup costs and rental period these prices are advertised as rental for a 2-week period, including production and placement costs but do not include VAT. 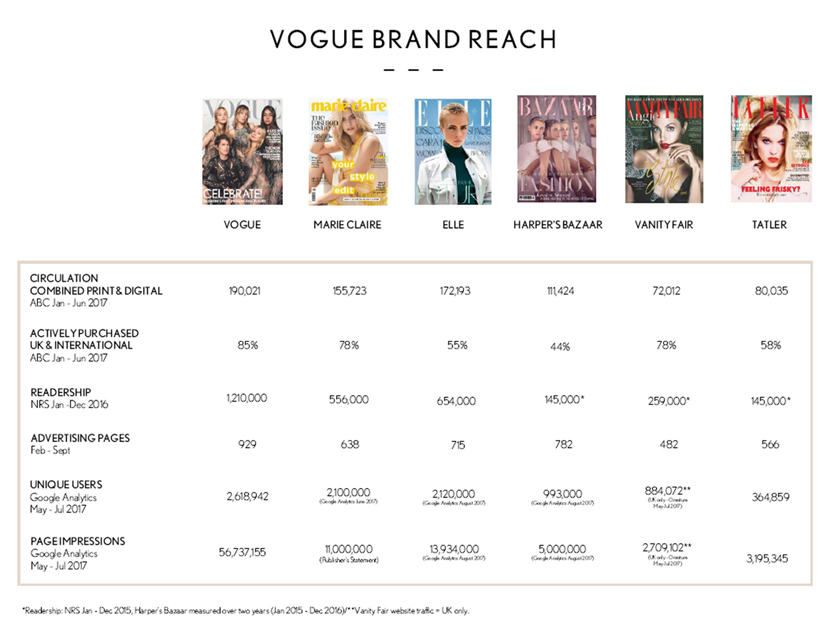 Radio According to radioadvertising.co.uk
“a week-long campaign that uses a 30 second advert (this does not include any production costs) could cost anything from:
• £500 on a local station
• £2,500 on a regional station
• Upwards from £10,000 on a national station