Cameron Balloons are at the forefront of all lighter-than-air technology.

With aims of High Altitude Flight, you can rely on Cameron Balloons Ltd for the challenge

As World leading experts, Cameron Balloons Ltd have the know-how and experience to support these attempts. Enabling flight high enough to see the curvature of the earth and to look out at the "inky-blackness of the cosmos" - which can be observed from altitudes of about 35,000metres / 114,800feet. 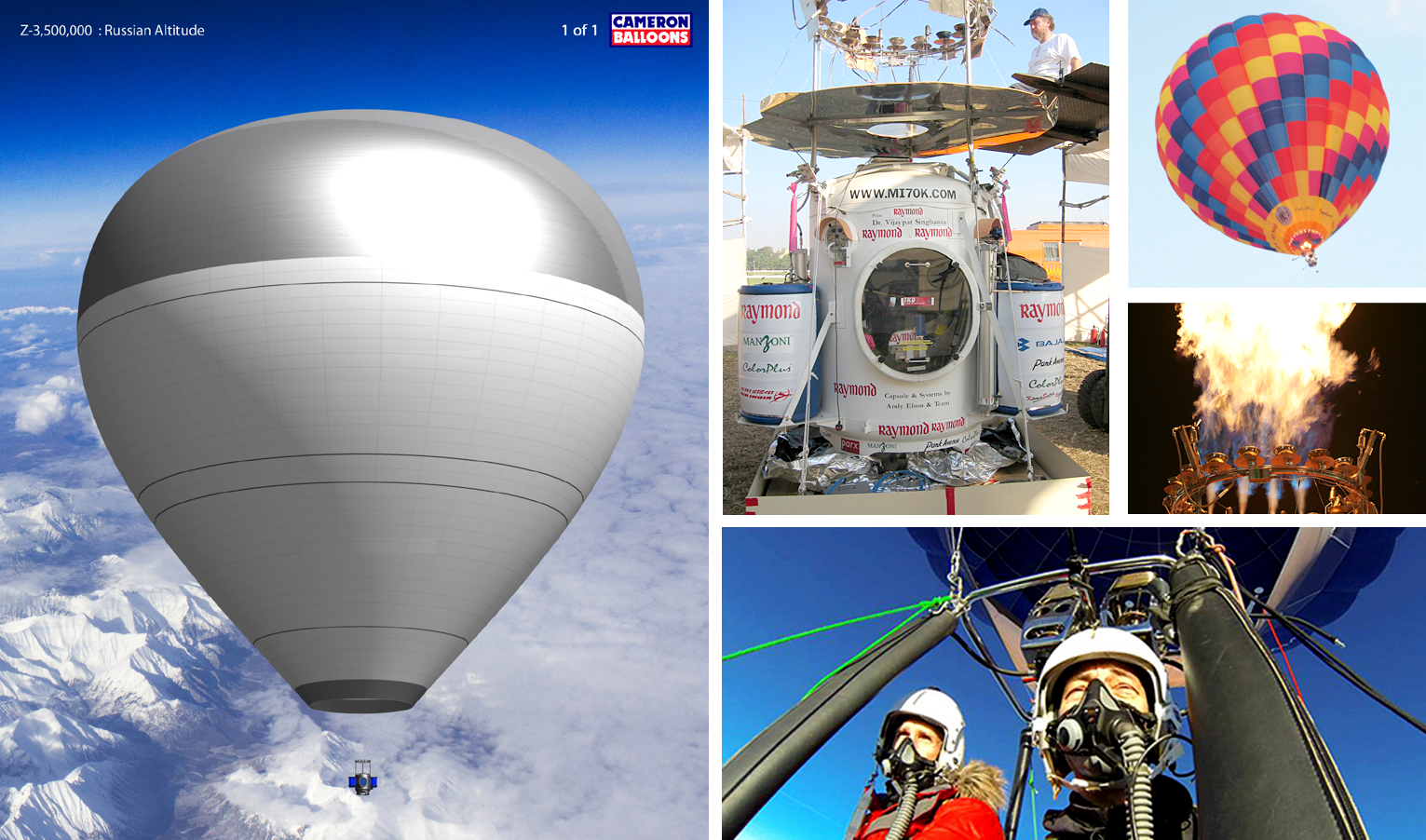 Flying through the Troposphere and into the Stratosphere

The Troposphere is the ‘layer’ nearest the ground and is 5 to 9 miles (8 to14 kilometres) thick - depending on where you are on Earth. (It is thinner at the North and South Pole.) This section of the earth’s atmosphere has the air we breathe and the majority of the ‘weather’ clouds and is made up of 78% nitrogen, 21% oxygen with the last 1% comprising of argon, water vapour and carbon dioxide. The air is densest in this lowest layer holding three-quarters of the mass of our entire atmosphere.

Above the Troposphere layer is the Stratosphere. This layer of our atmosphere also has its own set of layers. There are no storms or turbulence here to mix up the air, so cold, heavy air sinks to the bottom and 'warmer', lighter air remains at the ‘top’. The total opposite of how the ‘layers’ work in the Troposphere. The Stratosphere ‘layer’ is about 22 miles or 35 kilometres thick and contains the important ozone layer. The ozone layer’s main ‘job’ is to absorb the majority of ultraviolet radiation from the sun.

Additionally, there is also a layer where Auroras happen, the Ionosphere, where gases, with charged ion particles that have been affected by the Earth and Sun’s magnetic fields can be clearly observed glowing and shimmering in ‘waves’ of light, most usually around the poles visible against the long dark winter skies.

The next layer, although also too high for our projects, is known as Mesosphere and is about 22miles or 35kilometres thick and is the place where meteor showers or shooting stars burn-up across the sky as they whizz through this layer with the effect of friction of air, creating enormous heat and light that can be seen from the ground.

The Thermosphere layer lies in between the Mesosphere and the edge of space and temperatures in this layer can reach up to 4,500 degrees Fahrenheit / 2,482 degrees Celsius although if you could be in that environment you would be very cold because there aren’t enough gas molecules to transfer the heat to you. This also means there aren’t enough molecules for any sound to travel through either. This layer of Earth’s atmosphere is about 319 miles or 513 kilometres thick, much thicker than the inner layers of the atmosphere, but not as thick as the exosphere. The thermosphere is also home to the International Space Station as it orbits Earth as well as other low Earth orbit satellites.

Lastly, there is the Exosphere, the very edge of our atmosphere, the next area would be outer space. This layer is about 6,200 miles or 10,000 kilometres) thick. That’s almost as wide as Earth itself. The Exosphere is enormous and contains some gases including hydrogen and helium, but the molecules are very spread out with a lot of empty space in between and it’s very cold.